9 Weeks Till Scotia & Yet Another Race

by Phaedra Kennedy August 23, 2013
Yesterday I had a nice little reminder that my second A race is only 9 weeks away.  9. freaking. weeks.  Gah.   I had a bit of a panic attack when I saw that email but quickly told myself to chill out.  Normally I like to give myself 10-12 weeks to ramp up for a half, depending on my fitness level but when I sat down an actually thought about it, I realized that I was just fine.  I've been getting good solid long runs in so distance wise I'm good.  The one thing I haven't really been doing is focused speed work.  Although I guess you could count all my racing as speed work to a certain extent.  I definitely think it's helped but I don't have solid proof.   So, to test things out, I'm going to do another race.  Yup, as if my dance card wasn't full enough already.  I've got my last tri of the season this Sunday and I'm going to follow that up with a 10km on Sept 8th.  I'm going to do the MEC 10km and use that as a race pace test.  I'll do a good warm up, probably at least 20-25 minutes, race the 10km and then do a good cool down for about 15 minutes.   That should get me about 17km for the day give or take.  The race is only $15 to enter and it's not too far from my house so that makes it a no brainer.   The outcome will determine how much track time I'm going to have to put in between then and Oct 20th, ha ha.   I'm not going to kid myself, breaking 1:30 is going to be hard and it's going to hurt.  I'd be lying if I said I wasn't a bit scared.  But if I was close to doing it in March this year, I think it's within my reach. 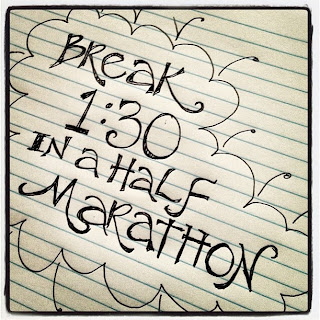