by Phaedra Kennedy April 15, 2014
One year ago today, the unthinkable happened.  Bombs went off at the finish line of one of the most hallowed races in running, killing 3 and injuring 264 others.  The shock, disbelief and outrage that followed was magnified a thousand fold by runners around the world.  In the days that followed, runners united all over the world to run for Boston.

In 6 days I will be back at the start line in Hopkinton.  I've trained through a very tough winter and I pushed myself hard this year.  I feel like I'm physically ready.  I might not be at 100% (damn knees) but I'm close.  Mentally I know what I'm in for so I think I'm ready for that too.  The bigger question  is, will I be emotionally ready?

Over the last few weeks there have been several features and interviews with some of last years victims.  There is an entire spread in Runners World.  I excitedly sat down to read month's issue and was surprised to find that I couldn't get through the stories without crying.  Anytime I read anything online about the race, I find myself tearing up.  Watching last years news coverage this morning brought a new flood of tears.  I was shocked and very upset last year when all of this happened but over the months that followed, it became a distant memory.  They say time is a great healer.  Now all of those emotions are coming back.  I am thankful that we didn't actually experience or see any of it but we saw the aftermath and that was enough.  I had a hard time watching the news coverage in the days following.  I had originally told G before the race that even if I re-qualified, I wasn't going to go back.  That changed the minute those bombs went off.

Running a marathon is an emotional experience at the best of times.  Last year I smiled from start to finish and was practically laughing out loud when I got to the finish line I was so happy.  I want this year to be the same and I will do my best to make it so but I also think I need to be prepared for the inevitable flood of emotions that will come.  I suspect that there will be tears shed at the start and as I make that turn on Boylston.  When they come, I'm going to let them flow.

Yes, I have a lofty time goal for this race but when it comes right down to it, the day is not about a finishing time.  It's a celebration.  It's a day to pay tribute to the victims and to celebrate the unity and strength of the running community and the amazing city of Boston.  And for many of us, a day that will hopefully bring some closure. 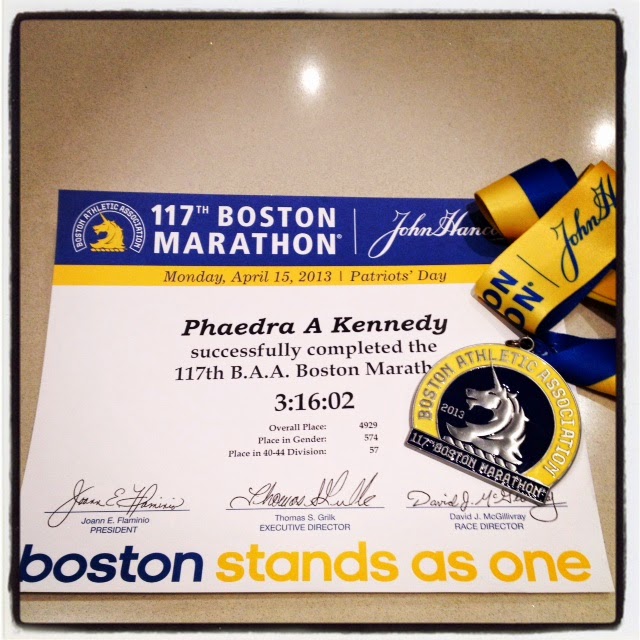 The tears will come but I will be ready.