by Phaedra Kennedy June 02, 2011
As a producer I live by this.  I don't normally take it account into my personal life though.  I suppose I probably should given the way things have been happening as of late.

This past weekend I ran The Toronto Women's Half.  I have never run a race that was just geared towards women.  I have to say that race director Cory Freedman is definitely on to something.  From the wonderfully designed race t-shirt (shout out to my talented friend Natalie Serkin for that), the amazing swag bag, the fantastic Fireman Aid station and the awesome finishers medal, Cory has managed to create a wonderful event that really is geared to a womans sensibility.  I have to say this is the first finishers medal that I've been able to wear the day AFTER the race and not feel like a geek for wearing it!  I can see why the race sells out early.  This was only the 3rd year and I think it was sold out by February.  There are 2 other races in the series, a 10km in August and an 8km in October, both of which I plan on doing.   The vibe of the race is incredibly laid back.  Lots of really good energy.  Even amongst the fast ladies at the front.   As we lined up in the starting corral, I noticed a lot of chatting and laughing.  I don't ever really recall seeing that at larger mixed gender races. It was a nice way to start a tough 21.1km journey. 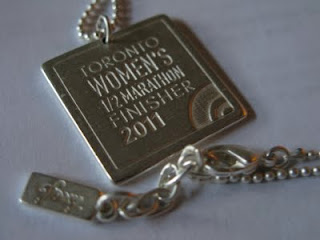 The race course is a challenging one.  They had to make a few last minute adjustments to construction on Pottery Road so I'm not sure if those changes made it even tougher or easier.  There were false flats and a couple of nasty climbs, especially the one at about 18km coming back over the bridge at Don Mills.  That was just plain EVIL.  The race took place on the bike path through Sunnybrook and Taylor Creek Park.  I'm not generally a fan of racing on paths but this was really nice.  It was almost like trail running without the trail because there were trees everywhere.  There were some points where it seemed pretty desolate (i.e no one around cheering) but the same could be said for any smaller road race.  The volunteers were amazing as were the race marshalls and the random spectators that dotted the bike paths. 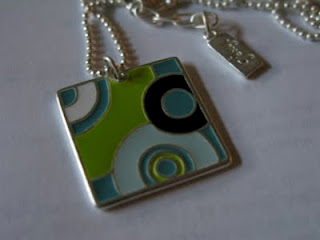 I was incredibly nervous leading up to this race.  Mainly due to the fact that I felt like I hadn't really trained enough.  Which was absolutely ridiculous but even after all my years of running, I have yet to be able to really quell this completely illogical fear no matter how much I have trained.  My training was somewhat spotty but I did a few over distance runs during this round of training as well as a whole lot of racing in a 2 month period (8km, a 10 miler and a 10km).  So realistically I was well equipped to run 21.1km.  My goal was to go sub 1:45.  I figured I had that in me at least.  I ran a 1:47 at the Chilly Half in March on less training and in crappy conditions.  I figured shaving 2 minutes off shouldn't be an issue as long as I tapered well and rested up before the race.  Well, I think I nailed one of those 2 things.  The taper went very well.  The resting up before the race, not so much.  I spent the Saturday before the race running around the city.  I made sure I packed some food with me but realistically it wasn't enough.  By the time I finally got home and sat down, it was about 4:30 pm and I could have eaten a horse.  Instead I had a burger and then another burger patty, both with cheese, and a salad.  Probably not the best pre-race food but it was quick and easy.  I slept surprisingly well and got up early.  We made it to the park in plenty of time.  I did a short warm up jog (in restrospect this should have been MUCH longer than the 500m I ran) and then stood in line for the porta potty.  I wandered around the race site with hubby, saw a couple of friends and tried to relax.  I eventually made my way into the starting corral and saw a few other Team RF athletes from the Newmarket store.  Chatted with them for a bit and then got ready to race.  I got up towards the front, behind the really fast looking ladies, as I figured it would be nice to have the space.  I figured I'd get passed by some faster women but hopefully not a lot.

The gun went off and I took off.  Far too fast of course.  5 minutes in and I felt awful.  It took me about 4km to calm down.  I ended up running with a couple of other women for about 2km or so and that helped slow me down.  At points were were running 3 abreast and I kinda felt like we were Charlies Angels.  There was a blonde, a brunette with shorter hair and then me.  Not really Kate, Farrah and Jacklyn but whatever.  We kept up a relatively decent pace (about 4:50-4:55's) and I thought ok, if this is all I've got today then so be it, it will still get me to the finish line under 1:45.   I did feel at times like I was struggling and I was a bit concerned that I was going to start to slow down as the km's ticked by.  Especially when I hit a false flat and my pace slowed to 5:00-5:05 km's and my heart rate spiked.  That didn't help the negativity that was starting to creep in.  What did help temporarily banish those thoughts were the random cheers of "WOOHOO" echoing through the trees that I'd hear every so often.   I couldn't help but smile.  There were points along the path where runners would be passing each other, one group on their way out and one group on their way back and there was a lot of cheering, woo-hooing and shouts of "you go girl".  It was pretty amazing.  I found myself smiling a lot, cheering women on, calling them by name (thank goodness for personalized race bibs!).  This in turn seemed to affect my pace.  My step became lighter and I felt like I was being pushed along by the amazing energy that was making it's way along that trail.  I eventually pulled away from my Charlies Angels pals and settled into my own pace.  I hit the Fireman's Aid station and was quite pleased with what I saw.  No one was shirtless, at least not yet, but they were a fine looking bunch of men, that's for sure.
The aid stations seemed to be well placed, although the only ones I really used were the Firefighter one (twice, ha) and the one at the 14km mark (with the crazy wig wearing folks).  The rest of the time I relied on my own supply of water and GU Brew.  I had my fueling strategy pretty much down pat and never really experienced any sort of drop in energy which was great.  Thank goodness for Roctane.  That stuff really is liquid gold.  I finally settled into a decent groove at about the 10km mark, which I went through in 47:36.  I actually felt like I had stopped hurting and that I was running well.  Note to self, next time I need to do a solid warm up as it shouldn't take me 10km to feel "good".  This feeling continued right through to about the 18km mark when I hit the back end of the Don Mills bridge.  Oh good GOD.  It HURT going up that hill.  There was another little hill after you descended from that one that also hurt.  It was like my legs hardly had time to recover the from the nasty uphill before they had to go up again.  The lactic acid build up in my legs hurt.  I had managed to hold it off until 18km so I was pretty pleased about that at least.  I had definitely picked up the pace a bit because I was slowly reeling in 2 women that had passed me earlier.  At 19km they had a chocolate aid station.  I wasn't going to grab anything here but there was a little girl about 4 years old who was so excited to be handing out chocolate bars that I had to stop and grab one just because she was so adorable.  I didn't really have any place to put it so I hung on to it.  Just after I passed that aid station I came up on woman number one who had passed me earlier.  She had stopped and was bending over.  As I ran up I asked if she was ok and she looked at me and I thought she nodded slightly so I kept going.  A little further up the path, there was another woman who was having trouble as well.  She was running and then stopped to walk as I passed her.  Just before the 20km mark, I saw a bike marshall riding towards me.  It took me a minute to realize it was my friend Tara Norton.  She had ridden out to see where I was at.  She turned around and rode me in, blowing her whistle.  SWEET - I had my own bike marshall!!  People were trying to figure out who this chick was (me), since the winners had crossed the finish line already.  My own husband didn't even know.  He thought that maybe Tara was bringing in the Masters Leader and then he realized it was me.  He was pretty surprised.  As was I to be honest. I had been doing mental calculations from about the 16km mark based on running 5 min km's (knowing that I would be faster than that) and I figured I'd be coming in around 1:43 or just under.   Once I hit the 19km mark I knew that I was going to be way faster than 1:43.  I ran that last km as hard as I could.  It hurt like hell.  As it should I suppose.  As I approached the finish line I saw 1:41:31.  My official time was 1:41:37.

Holy Crap.  I was beside myself.   That was a new PB for me by 2 whole minutes!   I certainly didn't think I had that in me going into this race.  My goal of a 1:40 half marathon at 40 is DEFINITELY within reach.  Gary thinks that I should set myself a "hard goal" for my A-race (something like a 1:35) and see what I can do.  We shall see.  I do know one thing for sure.  1:40 will be going DOWN come October.  Of that I am absolutely certain.

Final results:  5th of out 227 women (my age group was the largest so I am quite pleased) and 22nd overall.

Next up:  The Bread and Honey 15km this weekend.