by Phaedra Kennedy October 17, 2014
It's been a long while since I posted about music on here.  Probably because I haven't been running so I haven't added much to my playlist.  However,  I managed to get out last week so in anticipation of that glorious excursion, I did add a few new songs to my playlist.   I do have a few songs that will ALWAYS remain on my playlist simply because they help me push through tough moments during a run or just because they have a beat that I really enjoy running or working out to. Those of you that followed my Playlist Thursday posts know that I have somewhat eclectic taste in music.  The list below is no exception. 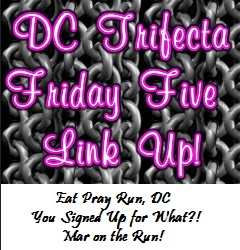 So, what brought this music talk on?  I'm linking up with Cynthia, Mar & Courtney for their Friday Five link up.   This weeks theme?  Fitness Tunes!  I love any opportunity to talk music.  It's one of my favourite things (other than running, triathlon and beer).  I listen to it in the car and all day at work.   These are my top 5 faves on my current playlist.

1.  Lord Huron:  Time to Run.  I just recently discovered this band and I can't get enough of them.   There isn't one bad song on their debut album.

2.  The Arkells:  Come to Light.   I'm totally loving this song by this Hamilton based band.  Yet another example of kick ass Canadian music.

3.  Rush:  Driven.   This song will probably never leave my playlist.  Something about the driving bass line really gets me moving.   I have a LOT of Rush on my playlist because, well, they just plain ROCK.

4. Reel 2 Reel:  I Like to Move It.   Tell me where else would you see Rush and Reel 2 Reel on the same playlist???  I make no apologies for this one, what can I say, I freaking love running to this song.  It's got the right beat and it totally pumps me up.  I have no idea what this dude is saying but I'm down with it.

5.  Franz Ferdinand:  Right Action.  These guys are also peppered throughout my playlist.  Another band that I absolutely love.  I can pretty much guarantee that any time their tunes come on, there's a little bit of hand dancing that happens while I'm running.  I'm sure I look stupid but whateves.  I'm enjoying myself and that's all that matters.

What songs really get you moving?   Head on over to the link up hosts to check out other Friday Five playlists!