Living Up To It's Name: The Chilly Half Marathon Race Report

by Phaedra Kennedy March 11, 2014
This would be the fourth year in a row that I've run this race and it will probably the last time I do it for a while.  It's time to explore different early season options.  Or perhaps next year it will be time for me to chill out for the first few months of the year.  Who knows.  What I do know is that this race TOTALLY lived up to it's name this year and I'm not sure I want to run through that crap again.

After a reasonably nice day on Saturday, I woke up to a fresh coating dumping of snow.  I had flashbacks to 2011 when the same thing happened.  The big difference between 2011 and this year was the temperature.  Not only did we get a large dumping of snow (more than what was expected) the temps were supposed to be hovering around -12.  Minus freaking 12.  Seriously.  That didn't bode well for setting any records, especially since I haven't been running outside much.  In fact, the only outside runs I've done in the last few weeks have been my long runs.  I've been on the treadmill for all my mid-week workouts because it's either been too cold, too icy or too snowy.

My game plan was the same as last year.  Comfortable pace for the first 13km and then at the turnaround, drop the hammer and see where that got me - Coach Ming said the same thing, although he suggested I start pushing the pace at 10km.  My goal was to come in under 1:30.  Even if it was 1:29:59.

I went out and did a 3.5km warm up.  It was freezing cold out.  I trudged through the snow up and down side streets and then made one last stop at the porta potty then made my way back to the Performing Arts Centre to find G who was right where I left him.  I handed over my water bottle &  took about 20 Energy Bits that I washed down with some GU Roctane.  I was going to be racing without a hydration belt.  I did it at Scotia with much success but I had a feeling today would be a bit more challenging due to the weather.  Last year, drinks froze so I figured the same thing would happen this year for sure, given the temperatures and that left me feeling a bit uneasy as I didn't think I'd get enough fluid in.  My plan was to have fluid at every aid station and take a GU Roctane at the 10km mark.  I figured the Energy Bits would get me to that point given the effort I was putting out.  I brought along an extra Roctane just in case.  I had no idea how the cold was going to affect me other than make things more uncomfortable than usual.

G walked with me to the start and I got my customary good luck kiss before I wandered off through the crowd.  I found the 1:30 pace bunny and situated myself just in front of him.  I was actually feeling fairly comfortable temperature wise and I'm chalking that up to my Mizuno Breathe Thermo top.  That top is amazing.   Anyway...I spotted Carm, Peter & Connie, some of my fellow WTP'ers.  I saw speedy Roger Jonas just ahead of me so I figured I was in the right spot.

The anthem was sung and everyone shuffled up to the front.  The countdown started and then we were off.  It didn't take me long to cross the start line.  I resisted the urge to hammer down Brant Street.  My knees were feeling a bit sore,  footing was dodgy and I didn't want to risk slipping on anything so I took it easy through here.  I figured once we got out onto Lakeshore the road would be a bit better.  I settled into a pace that felt comfortable for me and motored on.  When I glanced down at my watch at the 1km mark, I was surprised to see 4:09/km roll across my Garmin.  Um.  Whoa Nelly.  I figured I'd better slow down because I didn't think I'd be able to maintain that pace.  I managed to dial it back for the next few kms to closer to 4:15/kms which is where Ming wanted me to be.

I got into a good groove.  I felt like I was working but not too hard.  As predicted, there were ice chunks in the water & Honey Maxx so it was difficult to hydrate well.  I tried to grab a cup of each through every aid station.  For some reason I assumed that the aid stations would be every 2km but they weren't (note to self: always read the pre-race and course description info, d'oh).  This threw off my plan with having my gel at 10km.  I think it was actually closer to 11km when I got to have my Roctane.  At this point I could feel a slight twinge in my right hamstring.  Ugh.  It was cold out and I was kicking up all sorts of wet from the road.  My nice white Mizunos were no longer white.  They were a sad shade of grey.  And my tights were a mess.  Such is life. 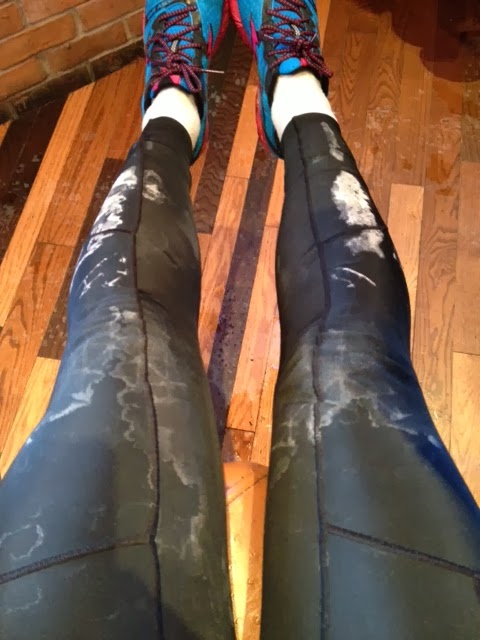 There were two women in front of me that I tried to keep in my sights.  I was closing in one of them until I hit the 11km aid station to grab a drink and slowed down.  She pulled away and I didn't start to reel her in until just past the 13km mark.  As I neared the 12km mark, I saw the leaders coming back.  The guy in first had a huge lead.  I was watching for the women.  I was curious to see where I was at in the pack.  I counted 8 women and I knew there were at least 2, maybe three in front of me so I was just outside the top 10.  Wow.  I figured that if I dropped the hammer at 13km I should be able to pass a couple of them.

As I came up to the turnaround just past 13km I got to see who was in front of me.  I was closing in on the girl that I had been shadowing for a while but what really spurred me on was seeing one of my West Toronto Pacer team mates, Karen.  She is FAST.  She is also in my age group so we were fighting for a podium spot.  She became my bunny.  I rounded the pylon and started to pick up the pace.  I was working hard.  I caught the girl I was shadowing and she tried to stay with me.  I don't know how long she was there for, all I could focus on was Karen.  I finally caught her.  It just about killed me.  Now I had to stay in front.  I had just passed the 14km mark when I saw my friend David who gave me a thumbs up.  The next thing I knew I heard my name and a man in black jumped in front of me and started running.  Enter the Dragon:  Ming the Amazing had come out to pace me in.  Seriously freaking awesome.  I felt like I had my own personal escort.  We were flying by people.  We reeled in another woman and I was now officially 10th.  The next few kms were F.A.S.T. :  4:02, 4:07, 4:05.  Sweet Jesus, I hoped I could hang on but I had a feeling that things were going to get real ugly, real fast. 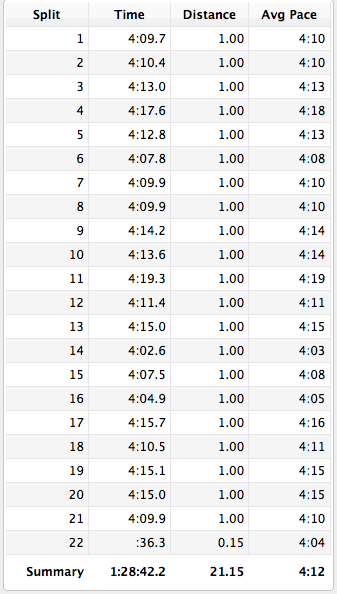 I heard Nicole yell my name and I smiled and waved.  Or maybe it was a grimace.  I don't know.  I do know that I was really hurting.  At 16km my foot started cramping.  Ming was pushing the pace and it was all I could do to hang on.  The self talk started, along with my mental math.  I focused on one kilometer at a time vs. thinking about how much time I had left.  We hit 17km and I could feel my hamstrings starting to really seize up.  I started to slow down.  I could feel the wind leaving my sails.  The last 3km would be run on fumes for sure.  Just past 17km the girl I passed earlier, caught me.  I had nothing, absolutely nothing left in the tank to try to chase her.  It was all I could to hang on to Ming.  I choked out the words "I'm dying" but Ming was having none of it.  He encouraged me to push through.  For the next 3km, he kept urging me on.  Just after we passed the 20km mark he started to get really excited, he was counting down the meters, telling me I had it, and to just keep pushing.  As we ran towards Brant street, I saw G who was yelling something but I couldn't quite hear what it was.  Ming kept pacing me until I had about 200m to go then he pulled off (he only had the 5km bib on).  Those last 200m hurt so much.  My lungs were burning as were my legs.  I could see the clock counting down and I heard the announcer call my name as I came up to the finish line.  I looked up to see 1:28 something.  I crossed the line and almost collapsed into the arms of my WTP teammate, Roger Jonas.  We were both gasping for breath.  I turned around to find Roger's wife, Karen, right behind me.  We high fived each other on a great race.  Then I saw Ming and he gave me the biggest hug and told me I did amazing given the conditions.  I've never had a coach pace me for anything or invest themselves that much for me in a race situation.  I know for sure I wouldn't have pushed as hard as I did if it wasn't for him being there.  I know it's still early in the season for me, but I feel my decision to go with Real Deal for coaching was probably the smartest thing I've done in a while.  Seriously folks, if any of you are looking top notch coaching, I highly recommend you check them out.
Final time:  1:28:40.  Not a PR but I didn't expect that given the conditions.  It was, however a PR for that course and enough to put me in second place for my AG.  First race of the season and my first podium.  I'll take it, thank you very much.  It was nice to catch up with a few of my friends after the race as well.  On our way home we met up with a few more of my friends to start my week long birthday celebrations.  I scarfed down a burger and sweet potato fries and then stopped for a caramel flan latte (not the best post race recovery food).  I wanted pancakes but we missed the brunch cut off by 30 minutes.  Boo. 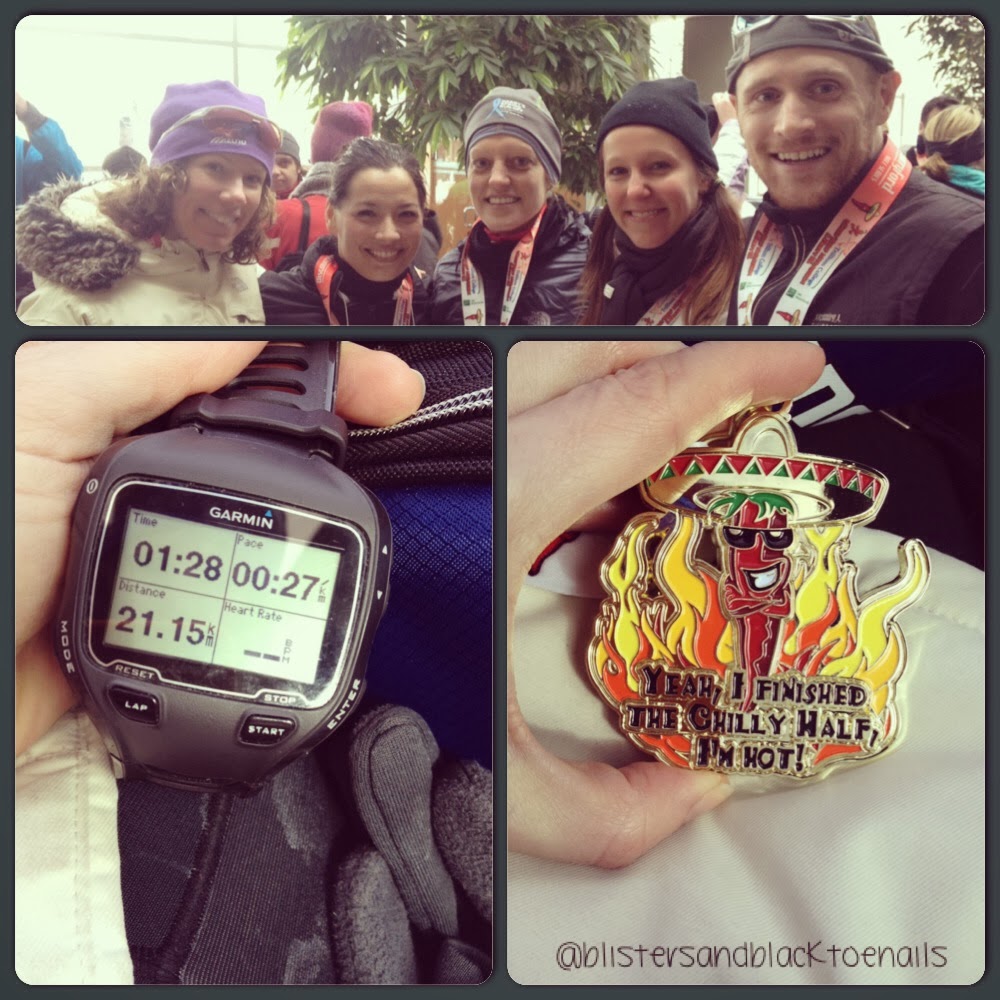 Next up is Around the Bay 30km.  Last year it was all about getting a gold medal.  This year, I'm not going to be so stupid.  It's a practice run for Boston, plain and simple.  I think last years race took a lot more out of me than I anticipated.  I still had a PR in Boston but I don't think I raced it to my full potential.  This year will be different.