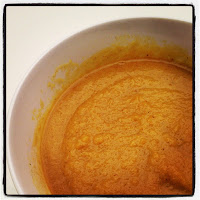 Halloween is coming and that means it's almost Jack-o-Lantern time!  I love carving pumpkins.  It's a messy job but they always look so cool when they're done.  Even better is the fact that you can eat it after.   Not raw, unless of course you're one of those folks that actually likes the taste of raw pumpkin.  If you're lucky enough to have your Jack-o-Lantern intact after Halloween night, you can cut it up and roast it to either make your own pumpkin puree.  Or if the colder temps have you craving something warm, you can use it to make soup.  That was my goal.

I figured I'd have a left over Halloween pumpkin so I thought I'd jump the gun and start experimenting now.  I bought two smaller pie pumpkins and used one to start.  I'm happy to say that my first attempt turned out to be absolutely delicious so the second pumpkin is still sitting on my kitchen counter awaiting it's own delicious fate.

Cut and clean up pumpkin and reserve the seeds.   Cut into chunks and toss with olive oil.  Spread onto a baking sheet skin side down and roast in the oven for 45-55 minutes at 375 degrees.  Let cool and then scrape out cooked pumpkin.

Add vegetable stock and bring to a boil.  Turn it down and let simmer until pumpkin has completely softened.  Let cool.

Pour into a blender or use an immersion blender to puree mixture.  Transfer back to pot and warm up over low heat.  Add coconut milk and stir in.  Start with 3/4 of a cup and add more if soup is too thick.  Top with toasted pumpkin seeds or cilantro & enjoy!