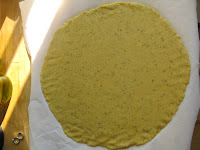 If there is one food that I hands down absolutely love, it's pizza.  There is something so perfect about a good pie.  You can put whatever you want on it, and you don't need any utensils or even a plate to eat it.  It's the ultimate convenience food.  I'm always looking for tasty ways make traditional fast food healthier.  Sure, sometimes it takes more time but I think it's worth in in the end.  I've made pizza on tortillas and on pitas and flat bread, which are fast and easy to use bases.  Both are good options but personally nothing beats home made dough.  A good pizza is really the ultimate anytime meal.  It's great for lunch and dinner and it's pretty awesome as a cold breakfast too.

Since I started following PN in late 2010 I've been trying to find something that is high in protein and a little lower on the carb scale so I can have it anytime (PN recommends consuming carbs post workout).  I tried a recipe using chickpea flour courtesy of Georgie Fear.  It was delicious.  High in protein and fiber,  but it was missing something.    Maybe it wasn't crispy enough.  Not sure.

I had seen a few recipes that used almond flour as a base and I thought that might be interesting.  I had purchased some to bake some almond cookies but I decided to use it for pizza dough instead.  Probably a smarter option for my waistline as well.  I found this recipe  and thought it sounded interesting.  I tweaked it a bit by adding some millet flour that I happened to have on hand. 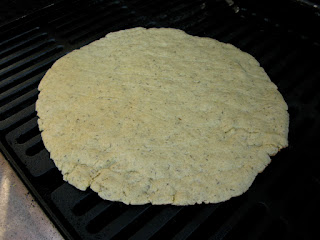 The dough was quite wet.  I rolled it out onto a piece of parchment paper as thinly as possible.  Fired up the BBQ on high till it hit 400 degrees.  I flipped the dough onto the BBQ, closed the lid and turned the heat down to medium.  About 5 minutes later I checked on it and it had firmed up nicely.  I let it sit for another couple of minutes and then moved it onto a pizza stone to top it.  This one had caramelized onions, sun-dried tomato pesto, prosciutto, zucchini, roasted red peppers & portobello mushrooms.  It was topped with mozzarella cheese.  Yum yum. 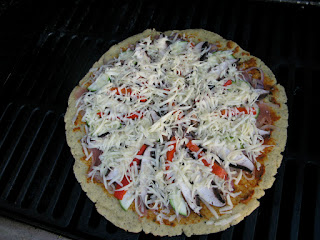 The final verdict:  The taste was, well, nutty.  The texture of the crust was almost like a dense cracker.  It was very crispy on the bottom and somewhat dry and dense on the inside.  The flavour was good but I've got to work on the texture.  I'm not a big fan of dense and dry.  It could just be the almond meal itself.  It could have been the millet flour as well.  Who knows.  Maybe next time I'll go half and half.  None the less, it was very filling and I only managed to eat 2 pieces before feeling full (normally I'll down 3 pieces easily).

The toppings were awesome.  Will definitely do that combo again.   Now I just need to work on perfecting the crust, one pie at a time. 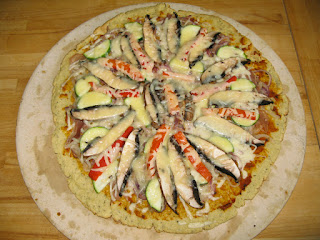